The global pandemic forced people to remain locked inside their homes. The worldwide lockdown at different stages in different parts of the world helped a bit to contain the spread of the havoc coronavirus, but it wasn’t that effective.

During this torrid period, people had to find solace at home and for that, they tried different activities that can help them to engross. During the course, online video streaming was one of the measures which kept people engaged and at the same time it turned out to be one of the modes of entertainment.

As we all know, Facebook is the world’s biggest social network which clearly means it is accessible to many. Over a period of time, Facebook has introduced many new features, including stories, regular updates with its reactions emojis, updates in messenger, etc. Now, in the latest update, they have decided to add Facebook’s official music videos to their social network specifically for the US, India and Thailand. 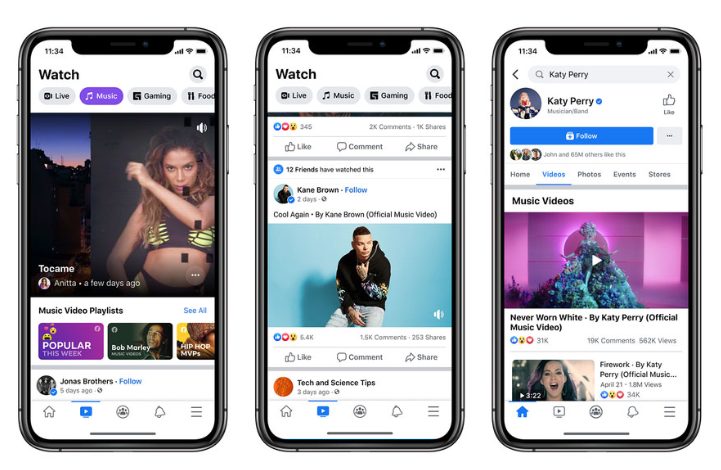 Before heading further, let me brief you about what Facebook’s Official Music video is. As we all know, YouTube has the biggest database worldwide with 46% of the world’s music streaming. Facebook is taking on YouTube in this market and is expected to give the latter a run for their money.

Talking about the feature, this will allow people to watch, find, and share music videos on Facebook. Adding to this, they will act as the source for exclusive music video premieres in the coming weeks which will include videos from artists like Calibre 50, Karol G, Sebastian Yatra, J. Balvin, Alejandro Fernandez, and Lele Pons, according to a blog post. This feature will enhance the user’s experience to a great extent.

Formed Base Courtesy Partnership With Many Big Names

To build the foundation for a better music video experience, Facebook said it is also been working with partners in India and Thailand. Names like Sony Music Group, Warner Music Group, Universal Music Group, BMG, Merlin, Kobalt, etc are a part of this process.

Talking about India, the ‘official music videos’ section will see giant names including T-Series Music, Zee Music Company and Yash Raj Films on its platform. It is to be noted that T-Series is the leading music company in the world with as many as 148 Million subscribers on YouTube. Getting them on board is definitely the icing on the cake kind of stuff for Facebook.

“Over the past year, we have been working with partners in the Indian music industry to build the foundation of a music video experience for our consumers, and are thrilled to launch official music videos feature by Facebook on the platform.

We will continue to find opportunities to add more unique social sharing experiences and bring music into the ways people share and connect on Facebook,” Manish Chopra, Director, and Head of Partnerships, Facebook India.

The Facebook watch will be a place where you’ll be able to find official music videos. A new Music tab has been created for the users and with time everyone will get used to the same. Just like any other video on Facebook, you will get to comment, react with emojis, and also share the official music videos feature by Facebook. You will also get pop up notifications on your newsfeed of the artist you are following.

On Friday, they touted how music platforms on their platform will help users engage with their favorite music stars via features like custom AR effects, hosting Facebook live Q&A, and raising money for important causes through the donate button in Live and Stories.

The launch of music videos comes just months after the Facebook gaming section was induced with Microsoft’s existing partners. The move took placed on 22nd July when Microsoft decided to close its Mixer service which meant the same transitioned to Facebook gaming.

When Is The Launch?

Many obstacles came in the way prior to the launch of the same. A month-long Facebook advertisers boycott over issues around hate speech on the platform which some brands are chosen to continue with. However, with all said and done, August 1st, 2020 turned out to be the launching date when the feature was available on IOS, Android and desktops.

This is definitely one giant leap Facebook has invoked. Competing with Google-owned YouTube is no simple task. At the initial stage, they are focusing on getting this move ample support in India, Thailand and the US. If the desired numbers are gained, the global spread will be the next move.