Ever since the inception of YouTube, the whole concept of streaming videos has become quite popular among us. Now that we have ultimate access to the internet, streaming is probably the best option available.

That number is only expected to grow on a much larger scale because of the abundant use of SmartTVs. Netflix app has been made available on these devices, which is quite convenient, to be honest, because most of the people prefer a bigger screen when it comes down to streaming movies or TV series.

This is the Dawn of Video Streaming Apps

Nowadays video streaming apps are the most preferred mode for viewing videos online.
The reason behind these apps being that famous is that it allows users can see their favorite shows including live sports on their mobile devices. This probably could be the sole reason behind these apps are getting popular across all age groups and demographics.
Netflix, on the other hand, is considered as a GOAT in this particular app category, but that doesn’t mean it’s all alone. There are more than fifty brands out there that provide video streaming services.
As per a report by Statista, the revenue of video streaming services has reached a whopping figure of $24.7 million in 2019 and is expected to keep on growing.

Why Should You Consider Making An App Like Netflix?

You didn’t found the aforementioned facts convincing enough to build up a Netflix app, then don’t worry because we’ve got some more.

We are assuming that you are convinced, and if it’s true, then we recommend you contacting an experienced app development company for further assistance. 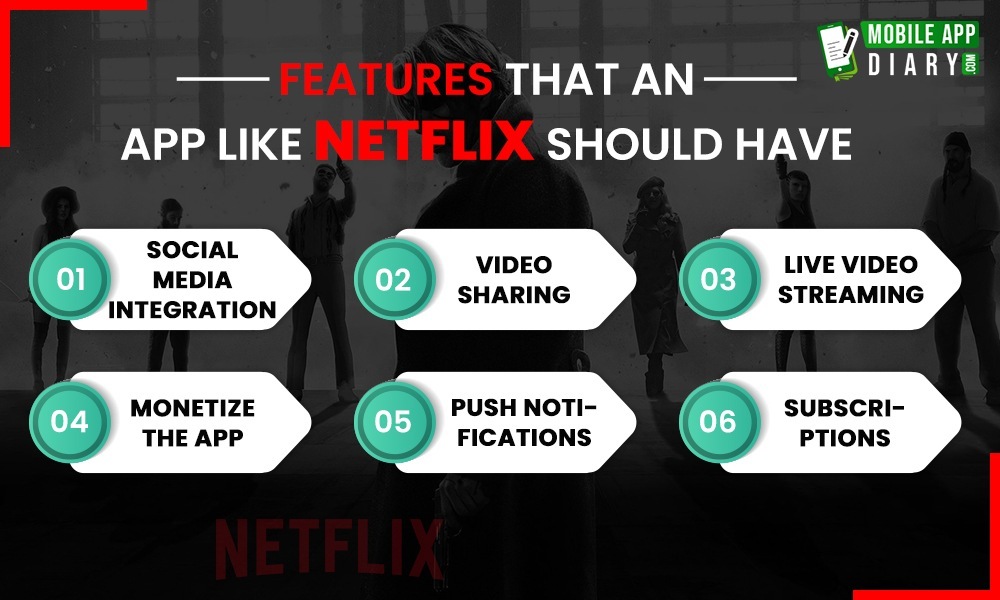 In order to develop an app like Netflix, you need to know features that have to be incorporated at first. And since you are planning on making your own streaming app, you have to make sure that the services you are offering must offer a little extra than your competitors.
Here we have enlisted some of the features that your video streaming app should have. And also keep in mind that the more the features, the more will the cost.

With the help of social media integration, you can easily share your videos with followers. Another benefit of this integration is that all the videos on your social media profile can be shared on a single platform.

Most importantly you need to make sure that you share live TV videos as well as the videos from all the other possible sources that’ll ultimately make the experience more enhanced.

Live video streaming is hands down the most preferred medium when it comes to watching videos. Consider incorporating this feature and you’ll end up with more and more users; that’s for sure.

Earning with an app is probably the primary reason why businesses opt making an app, which is completely understood as there are various methods to earn money. Here are some of the major modules, do make sure to check them out.

Sending out notifications is a great way to reach your target audience and connect with them. When used appropriately, push notifications can be leveraged to drive the following actions:

If you are planning on making money alongside keeping your users engaged, then adding subscription plans might be the best thing to do. Create different tiers for a subscription that would allow the users to get a continuous stream of content.

Factors that Affect the Cost of Making an App like Netflix

Making an app is a quite complicated procedure, which takes months to pull off; even then, there are chances of you ending up with bugs and errors. These issues can influence the initial cost of app development. But, we are not here to discuss such issues.
We present to you some of the factors that are known for influencing the cost of developing an app like Netflix.

It is quite an easy phenomenon to understand. The more the features you add, the more it’ll cost you in the end. We recommend you to add only the core features at the initial development. The second round of features can be added in the later versions of the app.

Nowadays, nobody appreciates an app that is complex in design. Users nowadays are more inclined towards minimally designed apps. Hence, it’s better to provide your target audience with a simple and intuitive app.

The app development process varies quite extensively while making an app like Netflix for Android and iOS. Android app development costs a lot more money than iOS because it involves a greater range of devices, resolutions, and configurations.

Video streaming apps are all about customer satisfaction. Binge-watching mode, unlimited TV shows, and movies; is there anything else that a user could ask for. Since these apps are now easily accessible via various devices, the world of entertainment is just a few taps away.
Keeping all the aforementioned facts in mind, an App like Netflix would cost you around $10,000 to $25,000 per platform.

Previous Post Luno Review: A Trusted, Reliable and Low-Cost Bitcoin
Next Post ColorOS 7 to be Unveiled on November 20