Who doesn’t love music? For many of us, music holds a special place in our life. Almost everyone loves listening to songs, and the presence of songs of every type and genre makes the experience better.

But it is often quite impossible to make a collection of songs in a single smartphone. A good quality free music app can come out as a great help. Finding a free music app is a lot easier nowadays, and piracy isn’t the easiest way. Nowadays, only a few applications are enough to locate the kind of music you like. Online music streaming apps are coming up every year, but some of them are much effective in separating themselves from the other because of their immense performance.

There is a variety of music and audio apps for Android, catering to just about every type of user. We have compiled a list of top 10 music apps for Android that can help you sing along, dance, or think.

The first one to hit the list is Spotify, the perfect app for streaming music. It is the biggest and arguably the best music streaming service around. The app is hugely proper with Android users. It provides a free, ad-supported service with some limitations. One can always choose its premium service as its premium model is the best.

There is a huge collection of songs, selected stations, and playlists and allows users to build their stations/playlists. The algorithm also incorporates lightweight material construction, support for Chrome cast, and currently, the laptop edition has more functionality than the mobile version. 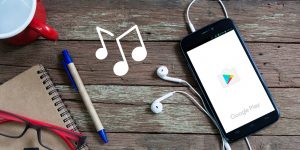 Youtube is the second most used search engine worldwide. It has millions of videos but what if all the data is available in the audio format. Yes, the app YT music lets you access all the songs in a better way. Now, you don’t need to keep your phone screen while listening to songs. You can make playlists, receive suggestions, and much more. It does come in two versions YT free (ad-supported) and YT premium for approximately $14 per month.

A strong alternative to Spotify and YT music that offers a vast variety of music. The app’s free functionality offers custom music stations, podcasts, and new releases being constantly added and the ability to store up to 50K of your songs in the cloud. The subscription to the premium version gives you access to more than 35 million songs. The app also gives users access to download songs for offline listening.

Another largest, democratic music streaming app that is preferred by people all across the globe. The Android mobile app allows a user to create an account and upload your music, podcasts, poetry, or whatever audio takes your fancy. You can explore the music and can subscribe to them to hear them every time they post something. It has over 150 million tracks and with the ability to create and discover new music, the app brings something on the table for everyone. The app also comes in two versions- a free and pro version.

The next to hit the list is the iHeartRadio app that is an internet radio app that offers thousands of different radio stations from all around the world. All kinds of genres such as music, sports, talkback, and comedy are included, as well as countless popular podcasts, with the ability to create your own personalized stations with your favorite content. The app is free to install and user, but also offers a paid version subscription plan that allows access to save and replay songs, listen offline, and more.

The grounds of the app are way different than any other music streaming app. The app claims to be the world’s largest collection of audiobooks and audio shows. The app is owned by Amazon with access to the company’s vast book library. It provides you with an ad-free listening to a huge variety of audiobooks.

Your collection is stored in the cloud that gives you the power to access it anytime across all devices. Audible is a subscription service but offers a 30-day free trial and a free first audiobook.

It is a personal music app player that lets you stream tracks from thousands of artists. The app is much similar to Spotify, Apple music. It lets you stream music, podcasts, and download MP3 tracks to listen offline, create playlists, and listen to radio stations. Deezer offers a unique feature of on-screen lyrics while a song is playing. It also has a feature called Flow, that provides a never-ending personalized radio of tracks based on your preference. The app is available in both a free and an optional premium version.

It is better known than its music for its talk radio, podcasts, improve show service. TuneIn has plenty of free music with over 100K stations. It has categories like AM and FM radio channels that can be accessed via apps. There is a little need to get the digital music edition on its own, but the app also contains audiobooks and more.

The next to hit the list is Pandora Music. What rings the bell about the app is its flexibility and cross-platform support which acts as a key feature. The Feedback is strong and they do offer a full-on demand streaming service for those who wish to experience. The free stuff available in the app works very well.

It is like a free Android music app wildcard that has a variety of music from big names as well as independent artists. Contrary to many, this service allows musicians to pay for performances that ensure that you can listen to a song that is performed by an artist. There exist no advertisements on the web as it is a better way to find new things.

With the presence of many audio streaming apps, I hope you never face any problem to find out the ideal music app for Android. Here I have listed out the top 10 music apps for Android. Do let us know about which one you are picking from them.