Word Travel is somewhat of an exceptional and free Cross word puzzle game. Try your best to solve these modern challenging word puzzles. With this “word anagram game” you’ll get to visit multiple cities of the world just like a world tour only a bit small scale. There are hundreds of addictive puzzles in the game. It has similar play mechanics like wordscapes but it has a great additional feature, while you solve puzzles you are travelling the best cities of the world!

What is the Game Mechanics of Word Travel?

You simply need to drag your finger over 3 to 7 letters on a circular letter wheel. If you find some meaningful words; it is added to crossword puzzle. It is so simple but your brain needs to be active. When you complete a level, you will complete level of a part. In parts, there are 5 to 8 levels; once you complete a part you will gain extra coins.

The Game Mechanics can be Listed as Follows:

What Differentiate Word Travel from Other Word Games?

Players who like word games are spending their free time playing such games. But some word games require internet connection. This game doesn’t require much to indulge in. Actually the greatest function of the game is providing traveling feeling to a regular word game. In many word games there are no such options.
For example, while you are playing world travel you will see images of some beautiful places in the world that are being visited by millions of tourists each year. Just imagine you are going to London, the game creates an additional experience to a regular word game.

To Sum Up, the Following Features Differentiate Word Travel From Other Word Games:

What Exactly You Can Learn From This Game?

Actually many games can result in some skill improvements on players. But this game is really teaching more than such simple skills. The teaching dimension of this game falls into two areas.

Firstly, you can learn vocabulary with this game; as it supports various languages. Its default language is users’ main language in his area but it can be changed accordingly.

The second teaching function is about learning cities. As the game’s name suggest, you’ll get to learn city names in most entertaining way possible. 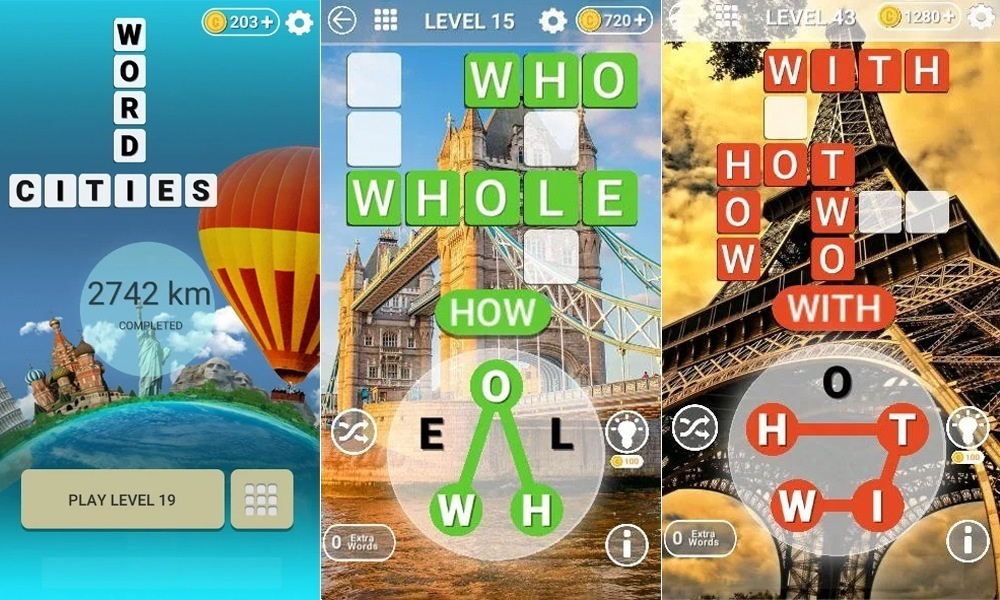 To Sum Up Word Travel Game will Provide You Some Learning Experiences as Follows:

• Learning vocabulary in both users’ own language or foreign languages
• Learning cultural information about the best symbolic places of the world best cities.

What are The Current Places in Word Travel?

There are too many levels that’ll keep you busy for weeks, and the best part is; new levels are consistently being added. The current cities are London, Paris, Prague, Barcelona, Lisbon, Rome, Venice, Athens, Amsterdam, Berlin, İstanbul, Stockholm, Copenhagen, Moscow, Saint Petersburg, New York. And consistently new cities are added for example in the next update 5 new cities will added as Tokyo, Shanghai, Dubai, Bangkok and Singapore. So there is not a limit in world travel experience. Once you start the game you will have a great and long world travel experience.

Word Travel has now become one of the popular apps among users, and here are some basic statistics related to the app:

Who Should Play Word Travel?

The game logic is so simple and anyone learn it in a single go. After learning the logic behind this game, it has an optimum difficulty level from basic to complicate. So anyone who is over age 5 who learn letters and could speak language can play this game.

So it is for everyone. Even in some comments, it is seen that even people who has small seeing disorder thanks for the developers because it could be played even by these players.

• Word travel is simple and addictive word game
• It provides you additional traveling experience
• You can learn vocabulary and symbolic place info by this game.
• It is for everyone, anyone who learn letters and language can play this game!